First things first, RMD’s bite is better. People have been asking, although I am reliably informed that, “the psychological scars never really heal.”

So, this week I have been mostly keep busy by consuming coffee in the company of good people. Hurrah for them all. Indeed, I think RMD is beginning to suspect that a little too much fun is being had, given that I’m supposed to be sick an’ all.

Also, we now have a cleaner, Amala from Romania. Even now she is filling the flat with a scent unfamiliar and strange. I can only assume these are the odours of the cleaning products with which this family is not overly familiar. She arrived with a range of products of her own, to match the huge bag of bottles and cloths I had purchased in anticipation. Not sure she was overly impressed with my choices, picking up each one and sniffing in a slightly disapproving manner. Not that I’m complaining. She had only been in the flat five minutes when she had her head in the oven, purely in a professional capacity, of course. (Her job is made somewhat easier by our oven being not much used for cooking. I refer readers to a tweet from RMD last night: “Ah, the unmistakable, appetite-quickening, mouth-watering sound of outer packaging being removed and film lid being pierced.” Indeed, Amala herself took one look, laughed, and said, “I’ve seen much worse.”)

I suppose having a cleaner is a little anti-keepingbusy. If I were truly keeping busy, I’d be doing my own cleaning, may be an argument. Completely fair enough. I’m choosing to go with the alternative view that this the time to be good to oneself and also, in my case, to rex3000 and RMD, who could probably do without wading through waves of dust balls in order to bring me the many cups of tea and bonbons that I will soon be demanding.

But here’s an actual keeping busy activity. I went to the National Gallery, bought their guide-book and saw several paintings on the tour, including The Arnolfini Portrait (1434), by Jan van Eyck. I learned: 1. Mrs Arnolfini is not pregnant, but holding up her full-skirted dress in the contemporary fashion, showing off that she can afford lots of extra cloth;  2. that van Eyck is doing something new and groundbreaking with oil paints.

Mr and Mrs Arnolfini and their extra cloth

I also saw The Wilton Diptych (1395-9), which I like because: 1. I enjoy the word “diptych; 2. those angels have such enormous wings; they remind me of the lady version of Brian Blessed’s Hawkmen in “Flash Gordon.” 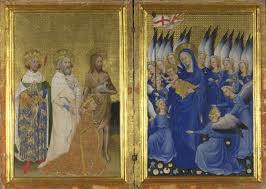 Coincidently, and very much in the keeping busy spirit, thanks to my young friend, Aggie, last week I had my nails painted the same colour as those frocks. Word has it that chemo causes odd things to happen to your fingernails which painting them may prevent. Unfortunately, not being used to painted nails, the polish was chipping off in a few days. Another good reason to have a cleaner.

You are currently reading “The psychological scars never really heal.” at anneiskeepingbusy.