Thoughts on endurance following a visit to Tate Britain

Me, minus tattoo and obviously without hair

This is pretty much how I’ve been feeling for the last week (Woman with an Arm Tattoo, 1996, Lucian Freud). I had my third chemo last Friday and this time has been somewhat rougher, a bit like a poisonous marshmallow has been pumped into my head and is expanding to fill all possible brain space. For several days, I have sat on the sofa for eight straight hours, watching episodes of Poirot and House of Elliot. I have thrush on my tongue, queasy rumbling in my tummy and would wrestle your grandmother to the floor for a whole night’s sleep. (Mr Davies says I have to say it like it is, and not always be, “Oh, yes, it’s not that bad really.” Fair enough.)

But today I am starting to feel better, at bit more like this:

I had a nice cup of coffee with Mr Fairhurst this morning and discussed the epic saga that is Australian Masterchef. Then I wandered around Tate Britain, dodging school parties, art students and the elderly, the only people in art galleries at ten on a weekday. I recommend the Don McCullin photographs, Mark Wallinger’s Threshold to the Kingdom, and Peter Doig’s Echo Lake. Then I had to have a sit down.

Chemo is a bit like having a baby. You have just enough time to forget how awful it is before they shoot you up again. I assume this is the only way to ensure that anyone comes back for another go. In the words of Harry Venn in the recent BBC drama, Hidden: “There are some things you just have to see through to the end. That’s all you can do.”  For sure, this is one of those things and times and while part of me thinks no one has ever had it so bad, I also know that isn’t true.  Only this morning, I found myself quoting Harry to Rex300, who would have given anything – ANYTHING – to not have to go swimming with the school today. I don’t think I felt any worse than he did. Rex3000 hates swimming lessons with the kind of immediate dread and passion which I haven’t felt since childhood, until that is, this treatment. He clearly thought I was bonkers, but it is what awful swimming lessons teach us, I suppose.  Shouty teachers, shivering at the edge of the pool, and not enough time to do up a top button and tie a tie, all to be endured.

And when we’re all through all this enduring, I’m very hoping it will feel like this: 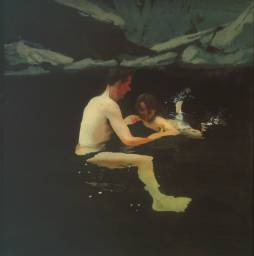 Melanie and Me Swimming, 1978-9, by Michael Andrews

You are currently reading Thoughts on endurance following a visit to Tate Britain at anneiskeepingbusy.