Common – thoughts provoked by a trip to the theatre 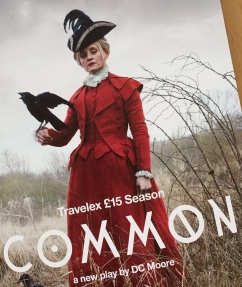 Yesterday, I went to see Common at the National Theatre. It’s had mixed reviews – Michael Billington describing it as “William Blake meets The Wicker Man” in The Guardian.  The play is set against the backdrop of the enclosure moment when, as Professor Peter Linebaugh, writes in the programme, much of Britain’s land was “privatised; moved from collective ownership into the hands of a few individuals.”

Of course, prior to the enclosure moment, the land didn’t actually belong to the poor. It was owned by the crown, the church or a local noble. But the notion of common land was a kind of compromise between what Linebaugh describes as, “the absolutist demands of private property and the subsistence necessities of common folk.”

Common land might provide for pannage (the right to graze pigs) or for the collection of estovers (wood); locals might have piscary rights (to fish) or turbary rights (to cut peat or turf). It provided for a kind of self-sufficiency, a way for the poor to keep themselves alive. As with the poor today, that was no easy matter.

Landlords began enclosing land in the late medieval period. It gathered speed with the Tudors, partly as sheep farming became more profitable, but was really forced home during the 18th and early 19th centuries. “Between 1760 and 1870, about 7 million acres (about one sixth the area of England) were changed, by some 4,000 acts of parliament, from common land to enclosed land.” That’s a hell of a lot of land taken out of common use.

And, of course, a poor agricultural worker had no power. No voice. In an article in The Land magazine, historian Simon Fairlie describes how consultation worked. “To make a modern analogy, it was as if Berkeley Homes, had put in an application to build housing all over your local country park, and when you went along to the planning meeting to object, the committee consisted entirely of directors of Berkeley, Barretts and Bovis — and there was no right of appeal.”

Which kind of brings me on to my point. Clearly, this is a mighty topic, and way beyond me to argue for or against. What do I know about the enclosure movement? There are reasons why land enclosure needed to happen – more efficient production, growth in population, movement of people away from the countryside and into the cities. So I should probably stop talking about it. Except that theatre and the arts are suppose to make us think. So this is me thinking.

On my walk from the National Theatre to the underground, this was the sight before me. 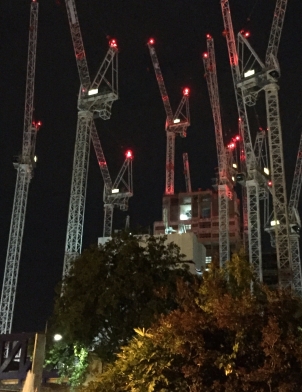 Many cranes, turning the site of the former Shell Building into something called Southbank Place, a joint development by the delightfully sounding Docklands office group Canary Wharf and Gulf developer Qatari Diar. According the The Standard, 868 homes will be built, including 160 classified as “affordable” and 52 extra care flats for the elderly and disabled. That’s nice, but don’t worry too much about the fortunes of Canary Wharf and Qatari Diar. A studio flat will cost you £540,000, with a two bed starting at £1m.

There were objectors to the development. They included the usual – local residents, councillors, Historic England and the Twentieth Century Society – but fear not. According to CityAM, those voices were over-ruled by the then communities secretary, Eric Pickles. He was confident that the scheme would “provide accessible jobs and homes, and enhance the character of the South Bank area”. So that’s all right then.

I’m not sure how we got from common ownership of land to this mess, when even reasonably well paid people in London have no chance of affording a home, let alone those on minimum wage, or not working. (One of the main arguments in favour of enclosures was that people who survived by working common land “were lazy and impoverished (in other words “not inclined to work for wages”), and that enclosure of the commons would force them into employment.” Sound familiar?)

This is a ramble, I know, so let me draw it to a close by making two vague, probably unhelpful and obvious points.

You are currently reading Common – thoughts provoked by a trip to the theatre at anneiskeepingbusy.